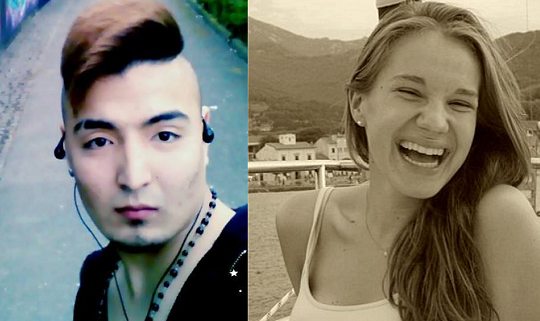 More than two years ago the rape and murder of Maria Ladenburger in Freiburg made headlines for several months. Young Maria was killed by a culture-enricher named Hussein Khavari, who had previously been jailed for attempted murder in Greece, but was released early.

Master Khavari was able to game the system by coming to Europe without papers and claiming to be 17 years old. He remained 17 for at least three years after his arrival, right up to the moment he drowned Maria in the River Dreisam. He’s probably still 17 right now, as he languishes in prison, serving a life sentence. (I don’t know how long it’s likely to be before the German penal system releases him. “Life” in Norway means 21 years — up there in aurora country they have a short lifespan.)

Maria’s parents were (and presumably are) active in the welcome-refugees movement. The following essay discusses the recent awarding of a multicultural appreciation prize to the elder Ladenburgers.

Original translation by Nash Montana of this piece from Young German:

Maria Ladenburger — Glorified as a blood-witness for a movement

Basically I’ve already stated my opinion about the behavior of murdered Maria Ladenburger’s parents. But when a few days ago I saw their grinning mugs, as they buoyantly held up straight into the camera a citizens’ award (Bürgerpreis) that was given to them by supporters of Merkel’s politics, I honestly felt sick to my stomach. It isn’t just the fact that they gained mighty financial capital — hundreds of thousands of euros — last year by naming a foundation after her. Rather, it is their ecstatic (verzückt) smile for the cameras as they were rewarded for their multicultural attitude towards citizenship. Parents of a girl who was suffocated, raped and drowned by an invading Afghan citizen after he already committed a similar offense against a young woman in Greece who survived the ordeal.

And for the fact that they so virtuously took the death of their daughter instead of even just once uttering words of discontent that certain circumstances were not what God meant them to be, but were manmade and could have been prevented, which lead to Maria’s death, they were honored by the prominent leaders in the land. They received a prize for having faithfully toed the state’s political line, for not complaining, even though they had lost their daughter as a direct consequence of Merkel’s migration politics. Either they are dumb, or evil. If they cannot understand that there is a direct connection between Maria’s death in the riverbed, the Afghani, their civil reward, the chancellor’s office and those fateful hours of 2015, then they are probably just not very intelligent, yet I doubt that. But on the other hand, if they should understand all this and are still willing to swallow it all whole, to accept it, and to be rewarded in return with prizes and metaphorical medals, because they had so willingly given up their child, then one might rapidly come up with the observation that their behavior simply is schäbig (shabby, tacky, tawdry, sordid, sleazy).

Federike Ladenburger reminds me of Mariam Farahat, the woman who was voted into the Palestinian parliament in 2006. Umm Nidal, the “mother of martyrs” as she was called, sacrificed three of her sons for jihad. Three sons whom she willingly gave away to become suicide assassins are dead. And for that she let the people celebrate her. And Clemens Ladenburger? His child is dead and he tours the Republic with a metaphorical medal on his chest that is supposed to attest to his politically correct attitude. Long ago, in darker times, the parents of so-called “blood-witnesses” received tributes and honor, prizes and flags for their slaughtered children who sacrificed themselves, or who were sacrificed, in the name of National Socialism. For their political conduct about their deceased daughter they were honored by the NS-movement. It appears to me that here and today, there are clear parallels which if you think about it more carefully, give you a stomach-ache.

Honestly, I find it hard to comprehend what is really going on in the Ladenburger’s heads, these plain middle-class (gutbürgerlich) parents. They don’t seem to suffer from any financial troubles. It is foreign to me and incomprehensible how they could react this way about the brutal death of their own daughter. Even if one doesn’t nurture a desire for revenge, this sort of victim cult is perverse to me. It seems to me that Maria Ladenburger has been glorified as some sort of blood-witness for an ideological movement. In other times and in other systems of government, she probably would’ve been wrapped into a giant swastika flag. Due to the lack of swastika flags, however, today there are foundations and prizes galore for those left behind, because they haven’t mentioned a single “bad” word or uttered “right-wing” thoughts.

The craziest thing about it all is that whenever I think of Maria Ladenburger I get very sad, because her death could have been prevented. To smile while pondering her, that is something that I would find rather hard to do. And I didn’t even personally know her. Also crazy is the fact that Susanna’s mother from Wiesbaden is acting very differently. She just wants her child back, and she wants to know how this could have happened.