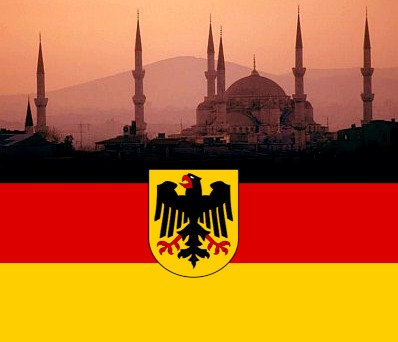 The following article was published at Alexander Wendt’s website. It points out that the only kind of “integration” that occurs in Germany is when immigrants overwhelm, drive out, or absorb the native German population. In Berlin, “integration” means turning Germans into Turks.

What happens in schools in which Turkish and Arab youths are already in the majority? Assimilation is in reverse: it is the “Almans” who are adjusting themselves.

I am 16 years old and I live in Berlin-Kreuzberg. I grew up between Görlitzer Park, Warshaw Street und Kottbuss Gate. At my elementary school the percentage of foreigners was past the 70% mark.

I experienced what the words “integration difficulties” really meant: A third grader sitting on the floor, crying and hitting at the teacher who tries to soothe him; a fellow student storming angrily out of the classroom after a warning and can only be brought back with much difficulty. Another who’s taking a nap during German class. And ultimately, a fourth-grader who visits the local mosque regularly and babbles on to me about good and evil angels sitting on my shoulders. It was a crazy time; the educational level was beyond ridiculous. I have learned absolutely nothing in elementary school. Nada y niente.

And still — and, yes, this may sound crazy — I was better friends with the Turks, the Kurds and the Arabs than I was with German students. Because most German students in Kreuzberg are just insanely dumb: They have been brought up anti-authoritarian; achievements and performance were foreign concepts to them, but their mommies were sure that something was going to come from them — something about painting pretty pictures or maybe music. The child could jam away on the drums so well…

When I got older, I went to grammar school, out and away from Kreuzberg. The older I got, the more things changed around us. Those Germans with the last bit of common sense left. Those who remained at the Kreuzberg schools soon only had two options left: Either they were excluded, and ridiculed as “Almans” — or they assimilated. They adjusted themselves. They assimilated so that they could belong to a deeply Islamic-shaped youth culture. There everything was about honor and family, and whoever said anything against it or just generally was of different opinion than the leader of the group got punched in the face. Sure, as far as alcohol and girls went, things weren’t so Islamo-puritan, unless it was about your own sister, so help us allah, because then it was a matter of honor. Shisha was all the latest rage, music came from rappers who were rapping things in broken German about punching people in the face and boxing. This culture reacted allergically to everything German, Western, and against everyone who didn’t immediately shed themselves of it.

I’ve watched how the assimilating Germans started to talk in slang. They took up the mannerisms of their migrant friends, and in order to try and completely evade the slightest accusation of Almandome, they would try to exceed and surpass their migrant friends in things such as aggression and the propensity to use violence.

The fact that culture functions in this way here is known by everyone, whether a student at Waldorf, SPIEGEL online reader, a Green Party member/fan, or just generally a tolerance-loving diversity fan: to accuse a migrant gang of cheating at soccer by Bolzplatz? Better not. To flirt with a girl with darker skin? Rather keep your distance.

The former New Cologne mayor and SPD politician Heinz Buschkowsky just recently aptly summarized it this way: “Today we have entire neighborhoods that offer a complete infrastructure like in the homeland. There is no pressure to assimilate and to learn the German language. On the contrary, there is a strong territorial behavior present. Young people say: we are proud Turks and Arabs. What do you Germans want here?”

There are four possible answers to this question: Remain here as a German and have problems. Remain here and stop being German. Remain German and move away. Or go to Waldorf school and make your name in interpretative dance.

There’s only one thing that doesn’t happen: That someone from my generation stands up to this evolution. The generation of left-over Germans who grow up in areas such as what I have described here, they have no confidence left. Instead of self-assertion, they self-decapitate. This is not something that just happens here in the extreme; it is happening everywhere. There is no fire of defiance and truculence left burning: not against the Islamic annexation of culture nor against the political patronization in schools and in the media who explain to us how we are all profiting from diversity.

These broken youths in times of total tolerance have understood that integration is not happening, at least not of the migrant kids into German society. There is no imperative need for them to integrate. The few among them who maybe wish a more secular and liberal milieu are prevented from living it or expressing their desires by their environment — for instance when a gang of youths through the pressure of the group make sure that girls wear their hijabs. In these city blocks — whether it be Berlin, Dortmund or Bremen and many more cities — there is nothing that represents our Western culture in any way. And even if someone wanted that: into what should migrant kids integrate?

There, where the majority situation has already been tipped over, assimilation has been going the opposite way for the longest time already.

Air Tuerkis is the pseudonym of a Berlin student and author who publishes the liberal student magazine Apollo News.