When I am not translating German videos and articles, I’m wearing my MAGA hat and do battle on forums and on Twitter and on various other battlefields of the Intertubes.

I also love to propagate meme pics. You may not realize it, but some of the funniest meme pics you’ve seen originated with Nash Montana.

In the following essay, I give you a progress report on President Trump’s efforts to get the wall built on our border with Mexico.

The Art of the Deal in Action!

So I promised a calm analysis of Trump’s border wall deal. Here it is.

Trump’s Rose Garden announcement was a stroke of genius. I just love a plan coming together. If you like the full Trump experience, he delivered, and you got it all.

You laughed, you cried, most of all you were generally entertained. And somewhere along the way, a stroke of brilliance shone through. The plan was coming together. The pieces of the puzzle started to make sense to me.

Sure there is a lot of bull[ordure] and a lot of wasteful spending in that deal. But what do you expect? It’s a Democrat spending plan, after all. They wrote in a bunch of restrictions, so, yes yes yes, we all know. But what did you expect? And did you really think the President didn’t see this coming, too?

Let’s. Take. A. Step. Back. Let’s spend a little time looking at this with a clear MAGA art-of-the-deal mind.

In the grand scheme of this entire process, it’s important to look at the stage where we’re at with the border wall, and I can tell you with complete certainty we are absolutely on target.

In other words, up to this point everything that has needed to happen, has happened. I mean, look at it this way: You can’t build a house starting with the roof. You gotta build everything else before you get to the roof.

That being the case, if you had one trillion dollars in unlimited resources for building the border wall, what do you have to do and where do you start?

The first thing is, you have to take what’s already there, and make sure that it’s where it needs to be. So over the past year and a half, with the first two appropriations that the President received, he was able to take that money, and use it to modernize and fix the existing border wall.

So let’s take a look at how much border wall already is there:

There are exactly 654 miles of border wall, most of which was voted on by Creepy Chuck Schumer and Clapping Nancy Pelosi once upon a not-so-distant time.

We have 654 miles along the Mexican border that are covered with a variety of barriers, which is roughly 33% of the entire border with Mexico. And that is according to the VERY accurate fake news New York Times. So don’t blame me if I got a number wrong.

However, at the onset of the Trump administration, a review by border patrol army engineers found that about 280 miles of the 654 miles are nothing short of a hot mess. There’s stuff on the ground, broken through, metal was scrapped: it’s a mess, and they found that we gotta do some work there.

So that’s what happened up to this point. Slight expansions were built at certain parts of the border wall, but for the most part, it’s been the fixing of the existing 280 miles that the border patrol found to be in need of fixing.

Now, the stroke of brilliance is $1.375 billion. Here’s what that number represents:

Sure, if you hear that number, all you hear is that it’s not the $5.7 billion originally asked for by Trump. But the question is: What the heck is that $5.7 billion?

Did you ever even know what it was, where it came from, or was that the number that our VeryStableGenius Trump threw out there saying, “Hey that’s what we need, that’s what the border patrol needs!”?

That’s all we all ever knew about that number.

That number is actually very specific. The 5.7 billion represents what it WOULD take to get to exactly 50% of the entire southern border covered. 977 miles to be exact. We are just under 34% right now. The 5.7 billion will get us to 50%.

But even then, is it gonna happen over night? No, of course not. You have to have contractors to pick up the jobs and then build the wall, and there might be 20 different contracting firms from all over the country, working on different places on the border, hoping that eventually it’ll all end up meeting the middle. 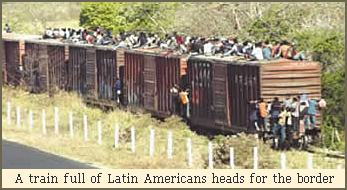 You gotta start somewhere. So where do you start?

Well, the number one priority of the border patrol, NUMBER ONE, is this 55-mile stretch in Rio Grande. That is what the $1.375 billion represents.

If you look at government contracts, (CM Ross, Casey Ross, whichever profile you use currently, you can probably back me up on this), and try to figure out how long for the type of wall and fencing it will take for them to do 55 miles along the southern border.

And guess what I found out. Using the information from previous contract work for the southern border, you know what the answer is? Six to eight months.

Now, take a calendar and walk down it a little bit, and see where that takes you. Six to eight months down the calendar will take you to September of 2019. And what’s so interesting about that? That’s when this funding deal ends. The funding deal funds us through the fiscal year of the federal government, which runs through September.

So here it is, the stroke of genius. The art of the deal by your President of the Estados Unidos:

He got as much money as was needed to accomplish the highest priority, to not miss a beat with making progress on the southern border, just in time to have another negotiation at the next budget-funding deal.

So, in other words, it doesn’t matter if he had $1.375 billion or one trillion dollars. Everything is absolutely on track, no matter what now, with this signing of the budget deal.

By going ahead and signing the Executive Order, as he laid it out in a very entertaining way, there is going to be a lawsuit. There are a lot of variables concerning where this lawsuit is going to be filed. Will it be Hawaii, California, Oregon… Washington? You know it’s coming, and it’s going to be in a state that’s stacked with Obama-appointed activist judges. You just know it.

And then, eventually, it’ll get to the Supreme Court, and maybe there’ll be a slight delay there because RBG is gonna bite the dust soon, but it’ll be okay. That is most likely going to be the case.

In the grand scheme of things, the long end of the curve, is about nine months that this could be tied up in the courts, but it could be shorter than that.

So look what the president has done: He has given himself a parallel path.

If by chance he wins on this Executive action before we get to the end of September, he doesn’t even need to negotiate with the democrats on the border wall anymore, does he?

He has the money he needs to get from here to there, for the rest of the term of his presidency. And you know it’s going to be a landslide victory in 2020 when even Nigerian princes chant “This is MAGA country” in the middle of the night in Chicago while wearing red hats!

But if it doesn’t work, what is he gonna do? Well he’ll go back and get the next piece of funding to keep the border wall on track. Piece by piece. He has at least six years’ time.

The president of the United States won. He won bigly. Yugely. And I know it’s not being disseminated that way for two reasons, besides the fact that THEY just want to discourage Trump’s support. People like TDS Anne Coulter will ALWAYS want you to believe that Trump is betraying you.

But here are the two main reasons:

One: Democrats have to save face with their constituency. So what are they doing? They’re going to go back and say, “Trump didn’t get his $5.7 billion.” Yet again, remember that nobody really knows what the hell that number even means.

Nancy Pelosi, who said, “Let me be clear, how many times do I have to say it, he’s not gonna get one dollar, not one dollar for that wall.” Uh, well, she was wrong. First he clubbed her over the head at the SOTUS, but then he managed to get $1.375 billion for that wall out of her dried up old [nether aperture].

So she has to account to her base for that, and from what I’ve seen so far, her “base” is NOT pleased, LOL. But still the Democrats can say, “We won more, because he got less than even half of what he was asking for.”

Two, the Republicans, from a strategic standpoint, are not going to lay out what I am just laying out here. Nor is the president going to do that so specifically. I doubt that most Republicans are even aware of what Trump has done here.

If Trump were specific about this deal, and if the Republicans did make it clear how much they won with this deal for the border wall, the Democrats would never have any motivation to ever negotiate with them ever again for the remainder of this Congress.

So it’s best to keep the idiots in the dark. On both sides of the aisle.

And as for the President, he gets to win playing to the base with the Executive Action, AND he gets to have a 2020 issue with the Democrats fighting against security of the southern border.

I mean, any way you take a look at this, it is a win politically fore the president. And most importantly, who is the biggest win for? It’s for the border patrol.

This isn’t about Donald Trump’s wall. This is the border patrol’s wall! They just simply weren’t getting the attention and the support they needed.

But the President went and listened to them on the trail and he made them a promise that he has followed through on. As he has pretty much on everything else that he has promised.

This is the art of the deal coming to fruition. But it’s a really funny thing:

You know how those on the left, and the Trump haters on the right, just love making fun of Trump and the way he speaks and tweets to us. They call him a moron and much much worse.

But let me tell you something: What we have to remember is, this guy didn’t manage to moron his way into a company that produces 10 billion dollars in revenue per year and operates in dozens of countries around the world.

You don’t moron your way into that kind of international success.

The guy is wicked smart. Even if he doesn’t always come across that way according to a lot of people. Not to me, I disagree. I never doubted his intelligence. The firehouse twinkle in his eyes shows me just how wickedly StableGenius brilliant the man is.

So the art of the deal was struck yet again, and he’s won, and he’s got parallel paths. It doesn’t get anymore strategically successful than that.

We all win, and I ain’t tired of winning yet. How about you?