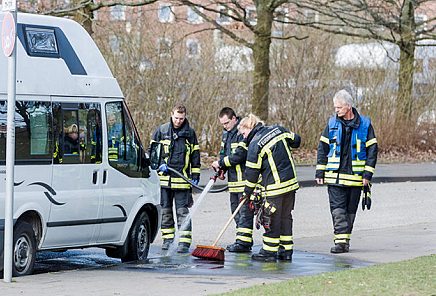 In the German city of Kiel, a culture-enriching man with a history of mental issues killed his wife on the street in broad daylight. Based on the description, it appears that the perpetrator slaughtered the victim in halal-sanctioned fashion.
Translation Nash Montana from PI: https://www.pi-news.net/2017/03/kiel-tuerke-schlachtet-ehefrau-vor-schule-ab/
Kiel: Turk butchers his wife in front of school
Today Kiel was “enriched” with the experience of an Islamic honor murder. On Wednesday morning at about 9am in the Kiel district of Neumühlen-Dietrichsdorf, in close proximity to the Toni Jensen non-denominational school and day care, a woman was found bleeding profusely. The police were called, and within a short time the 40-year-old German-passport-holding Turkish husband of a mother of three was arrested. He had attacked the 34-year-old woman with his knife so severely that she bled out on-site. According to the police report the investigator assume that it was a “domestic violence” case, which is what honor murders are basically called these days in fantasy land.
The man had drawn attention to himself in the past for domestic violence. He lived separated from his Turkish possession, but supposedly there were custody issues over the children, aged five to sixteen. One witness who claimed to know the man said: “He was indeed a little disturbed.”
Psychologically disturbed man in a psych intake ward, that’s probably what this “domestic violence incident” will amount to once again.